Though relatively new, the Rev Auto Show gets top marks from iDriveSoCal’s Professor Quan. With the best of the best and rarest of the rare on display in an exclusive setting not normally open to the public our good Professor was a like the proverbial kid-in-a-candy-store.

Hear his complete analysis of the 5th Annual Rev Auto Show held at the private Sherwood Country Club in Thousand Oaks, California in this iDriveSoCal Podcast.

Clinton Quan: This is probably the most exclusive car show in Southern California in terms of the quality of the cars. You might be able to see them at a museum. Maybe if you travel to all the museums throughout the world, you might. From Ferraris, Porsches, Aston Martins, Maseratis, Alfa Romeos, Mercedes Benz these are really the cream of the crop from every luxury and exotic car company,

Tom Smith: Welcome to iDriveSoCal, the podcast, all about mobility from the automotive capital of the United States, Southern California. Tom Smith here with our good pal, the professor, Mr. Clinton Quan. Say hello, Clinton.

Tom Smith: Hey, hey. Today’s podcast, we are talking auto shows. This is part of the professor’s awesome Auto Show June here in Southern California. Today’s topic is the Rev Auto Show, which Clinton’s going to tell us all about. But basically, it is very super high-end cars Concours d’Elegance level cars, but it’s not a judged show. Which makes it not a Concours d’Elegance.

Clinton Quan: Yes, Tom. This is probably the most exclusive car show in Southern California in terms of the quality of the cars and in terms of the pricing for the event.

Tom Smith: The pricing for the event.

Clinton Quan: As far as I know, there’s no other car show that’s more expensive than Rev Auto.

Tom Smith: That’s a pretty priced ticket. What do you get 150 bucks, other than to look at some very nice cars that you could probably see in a museum, right?

Clinton Quan: You might be able to see him at a museum.

Tom Smith: Really? Some of these car-

Clinton Quan: Some of these cars, very rare cars that you might not be able to see. Maybe if you travel to all the museums throughout the world, you might.

Tom Smith: I was checking out your pictures, and there’s some amazing cars, mostly all old stuff, but some relatively new stuff. ’80s, ’90s, and even a brand new, what was that beautiful-

Tom Smith: Yeah. Tell us about the Rev Auto Show. How long has this been going on?

Clinton Quan: This is a fairly new car show. This year was the fifth year of the Rev Auto. Last year, it also took place at Sherwood Country Club, which is a private club in Thousand Oaks. Previously, it took place at Four Seasons Westlake Village.

Tom Smith: Okay. Does it move around or just happened to move once, or to be determined?

Tom Smith: Okay. And the cars at this show we’re absolutely fabulous. Tell us about those.

Clinton Quan: Yeah just stunning a display of automobiles and pretty much whatever you like you’ll find there. From Ferraris, Porsches, Aston Martins, Maseratis, Alfa Romeos, Mercedes Benz these are really the cream of the crop from every luxury and exotic car company, including Bugatti a EB 110 Super Sport from 1994.

Tom Smith: So, this is the connoisseurs car show?

Tom Smith: Really. You’re not going to see a souped up Pinto or Gremlin at this particular show?

Clinton Quan: No, not at all.

Clinton Quan: Yeah, these are really the finest cars from every manufacturer. We’re talking the 1967 Lamborghini 350 GT, which is without a doubt one of my favorite cars of all time. And I think one of the most beautiful cars ever produced. The iconic Ferrari F40. The Porsche 959, which was the direct competitor to the Ferrari F40. The Bugatti EB 110 Super Sport I mentioned earlier. The Mercedes Gullwing. The Aston Martin DP-4. These are truly the most iconic cars of all time and we have pictures of all time.

Tom Smith: And we have pictures of all of these on the website, idrivesocal.com, on this particular podcast post, on idrivesocal.com. So, check out the pictures that Clinton’s talking about.

Clinton Quan: Well, as I mentioned, it is a private Country Club. So, it’s not like to anyone can just go in there.

Tom Smith: Al right. So, you’re getting access to the club as well as-

Clinton Quan: If you’re going to pay $150. [crosstalk] There’s also a champagne brunch, a live jazz band, and they’re playing music throughout the event. There’s a silent auction. So, it’s quite an event. And they have cars throughout the venue. Not only outside, but they even had cars displayed inside where you’re dining or out in the patio area where they have live music.

Tom Smith: Okay. And this show is only five years old. You mentioned connecting with one of the co-founders to set up your attendance. Tell me about the history of the show, and maybe the co-founders as it’s relevant.

Clinton Quan: Derek Hill. He’s one of the co-founders of the show. He’s the son of the famous racecar driver Phil Hill. He co-founded the show.

Tom Smith: Phil Hill was a famous racecar driver. What did he race? What did he drive? It wasn’t NASCAR, right?

Clinton Quan: No, no, no, it wasn’t NASCAR. I don’t remember all the different forms of Motorsports he participated in, but he is a well-known racecar driver.

Clinton Quan: Yeah, before my time.

Clinton Quan: Yes. So, this is an event that he co-founded and wanted to do something really, really special. For the past five years, it’s been truly, truly special event. Last year, the event, I believe it took place in February and I remember it rained really hard. So, I think that’s the reason why they moved it to June.

Tom Smith: Yeah, that’s a bummer. You don’t want these cars … The average value of the vehicles that they’re saying hundreds of thousands, if not million plus?

Clinton Quan: Oh, easily hundreds of thousands to the millions of dollars. Yeah. And the other reason that this show is so special is that some of these cars are really the most exclusive cars. They’re very limited in production.

Tom Smith: That’s what you’re saying, one of them, what? This was unsubstantiated information, but one of the vehicles was supposedly one of three?

Clinton Quan: Yes, I was told it’s one of three. Maybe I misheard, but I’ve-

Tom Smith: And which one was it? We need to make sure we point that out.

Clinton Quan: But it’s a super sport. So, I guess that-

Tom Smith: Quite honestly, I thought the car looked a little odd. it’s like it was an ’80s or ’90s or something like that.

Tom Smith: It kind of looked like that. It looked like the person stepping out of that might have had parachute pants on, or jeans with a tight roll, and some high tops that were not laced up with a mullet. It had a Back to the Future kind of feel to it.

Clinton Quan: Yeah, it’s not the most elegant. I wouldn’t say it’s the most beautiful car either, but it is a very exclusive and rear car.

Clinton Quan: And it is a Bugatti.

Tom Smith: And it is a Bugatti, right. All right. Well, the Rev Auto Show is now going to be an annual thing. Thanks to the Rev Auto Show guys for having Clinton and his son out at the event. Are we going to post pictures of both you and your son?

Tom Smith: All right. So, check Clinton out and his son. They look fantastic all decked out. This is the kind of show, folks, that you want to go to if you … It’s an event. This is a little bit of an automotive car culture religion kind of thing. This one actually was even on Sunday, so you get decked out and you go and spend some money. But you are treated to an elegant affair. You mentioned mimosas were flowing?

Clinton Quan: Yes. Flowing mimosas. And, I didn’t mention this one also had a safari theme. So, that was another special element.

Tom Smith: That’s right. They had a giraffe.

Clinton Quan: They brought out animals, and the special guests was … As soon as the giraffe came over, everyone was taken photos. That was the star of the show.

Tom Smith: Because even though we’re in Southern California-

Clinton Quan: The giraffe was only there for a limited time as well. Not throughout the entire duration of the event.

Tom Smith: So Rev Auto Show, one of the professor’s awesome Auto Show events in the month of June. We will have the 2019 now version of the show posted on the events page as soon as they have a date. But definitely check this show out if you’re so inclined to drop a little bit of money, but go and enjoy a very nice affair and check out some of the most exclusive vehicles on the planet, right?

Tom Smith: Professor, thank you so much as always.

Tom Smith: For iDriveSoCal, I am Tom Smith. Thank you for listening.

*Once COVID Is Over!*
Never Miss
Another Awesome Event!
Join our mailing list and
we'll send them weekly. 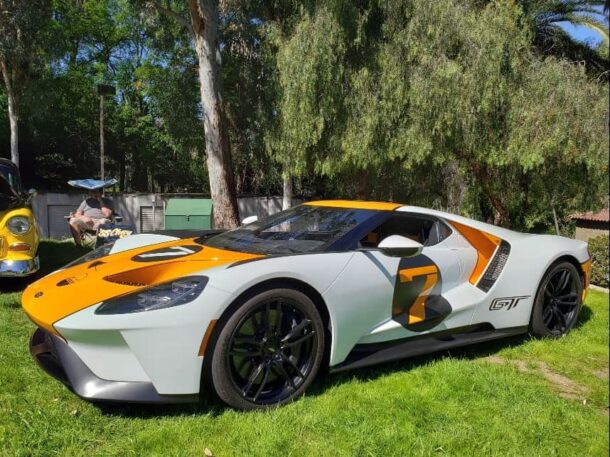