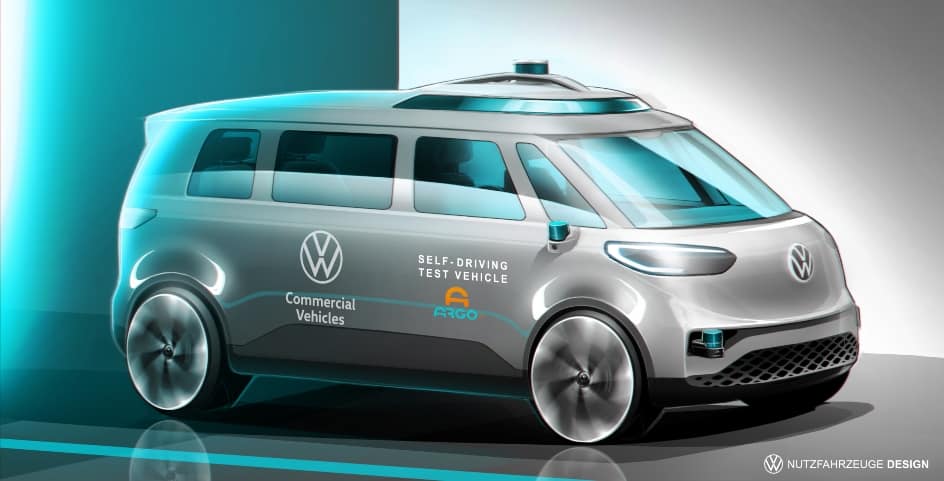 The commercial arm of Volkswagen is honing in on autonomous driving systems. They’ve just unveiled new information about the Volkswagen Autonomous ID.Buzz, a futuristic vehicle that will have its world premiere in 2022.

Volkswagen Commercial Vehicles is focusing on intelligent and electric driving systems with hopes to have smart vehicles on the road by 2025. VW plans to use the ID.Buzz as a ridesharing vehicle in urban areas. Consequently, testers have to verify the software is safe beforehand. So VW will run trials with the vehicle in Germany this year.

The ID.Buzz is a futuristic version of the classic VW microbus. We don’t know everything about it yet. However, VW has revealed some details. Its battery capacity starts at 48 kWh but can be increased to 110 kWh. Range-wise, VW says a single charge should give drivers between 200-340 miles of travel.

Inside, the Volkswagen Autonomous ID.Buzz is spacious and customizable. Currently, concept drawings show that the seats can swivel, fold-down, or be pulled out entirely. Additionally, the microbus will have a movable console. This piece can be used as a table or set aside to create extra space.

We don’t know what the infotainment system will look like in the ID.Buzz yet. However, it’s safe to assume that it’ll use VW’s advanced Car-Net Software. Additionally, the vehicle will probably have a WiFi hotspot and other connectivity features.

Since the end goal is to use the ID.Buzz as a ridesharing vehicle, safety, comfort, and efficiency will be key. VW plans to have fleets of these microbuses in major cities. They’ll serve as a self-driving alternative to public transport.

Software Capabilities in the ID.Buzz

Testing is still in the early phases for the ID.Buzz’s software. So we can’t be certain of what will or won’t be included in the final product. However, development company Argo AI is working on autonomous systems for VW. And since VW is focusing on a self-driven future, they’ve pumped a billion dollars into the company. Furthermore, VW has its own Car.Software Organisation that’s working alongside Argo AI on the Volkswagen autonomous ID.Buzz.

Finally, VW has teams working on Special Purpose Vehicles (SPVs), like robo-taxis and vans for urban use. Someday, if testing and development go well, VW will have a fleet of self-driving cars on urban roads everywhere.